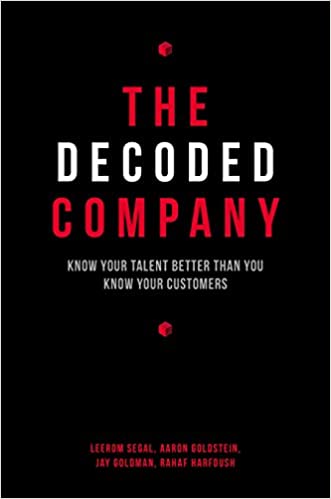 A powerful guide to building a data-centric corporate culture that unleashes talent and improves engagement Amazon delights customers with recommendations that are spot on. Google amazes us by generating answers before we've even finished asking a question. These companies know who we are and what we want.

The key to their magic is Big Data. Personalizing the consumer experience with the collection and analysis of consumer data is widely recognized as one of the biggest business opportunities of the 21st century. But there is a flip side to this that has largely been missed. What if we were able to use data about employees to personalize and customize their experience - to increase their engagement, help them learn faster on the job, and figure out which teams they should be on?

In this book, Leerom and his colleagues outline the six principles they've used to decode work and unlock the maximum potential of their talent, and share success stories from other organizations that have embraced this approach. The Decoded Company is an actionable blueprint for any company that wants the best from its people, and isn't afraid of radical approaches to get it.

Leerom Segal is the president and CEO of Klick and has been named "Entrepreneur of the Year" by the Business Development Bank of Canada, won the "Young Entrepreneur of the Year" award from Ernst and Young, and was named to Profit Magazine's Hall of Fame as the youngest CEO ever to lead a nonprofit company. Aaron Goldstein is the co-founder of Klick and is a Senior Certified Project Manager Professional. Jay Goldman was Head of Marketing at Rypple, a venture-backed startup acquired by Salesforce in 2012 and now known as Work.com. He is the author of the O'Reilly Facebook Cookbook, and he has been published in the Harvard Business Review. Rahaf Harfoush is the author of several books including Yes We Did. She was a contributor to the best-selling Wikinomics and Grown Up Digital.